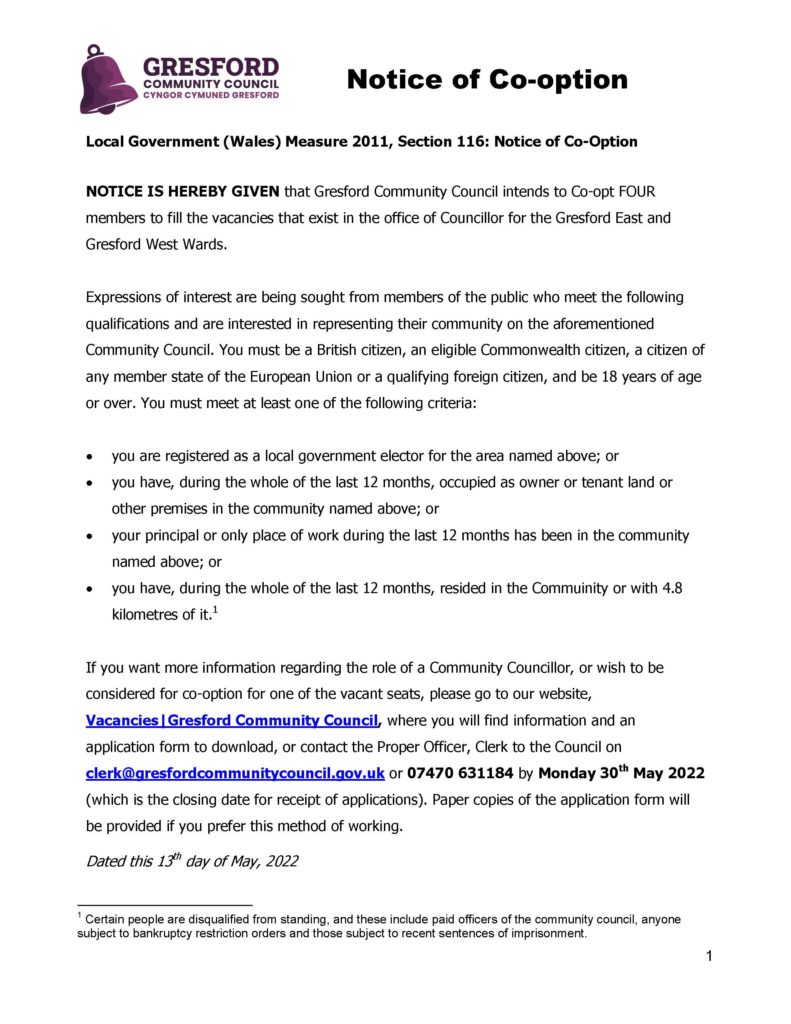 Following last night’s meeting of the newly constituted Gresford Community Council, we are publishing today formal notice of our decision to co-opt to our vacant seats. The notice is here on screen and also as a document below which you can download if you wish. Also below is the application form you need to use if you would like to apply to be co-opted onto the Council. There is information about the role and how the co-option process works too. This is an important role; Community Councillors work hard to help the community and keep it a safe and great place to live. We’d love it if you would join us.

The outcome of the 5th May election to the Community Council has resulted in FOUR vacancies because our election was UNCONTESTED; this means that there were the same number, or fewer, nominations than there were places for.

We are waiting for advice from WCBC on how to go about filling these vacancies; do we have to wait until after the 5th May election before we fill the places? We’re not sure. Do we still need to have the bi-election phase, or has this been dealt with via the 5th May elections? We don’t know.

As soon as we have information on how to proceed further information will be posted on this page.

This page will advertise any vacancies that arise within the Community Council – for Councillors or staff.

If vacancies for Councillors arise we first have to publish a notice asking residents if they want to trigger a BY-ELECTION; TEN residents have to respond saying they do want one for a by-election to go ahead. If 10 residents do not request a by-election we move on to the CO-OPTION phase. In this phase eligible people who would like to join the Council fill in an application form. The forms go through to a meeting of the full Council and Councillors vote on who they would like to co-opt. A leaflet explaining a bit more about how it all works is attached here for you.

These files may not be suitable for users of assistive technology and are in the following formats: .pdf. .jpg. Request an accessible format.